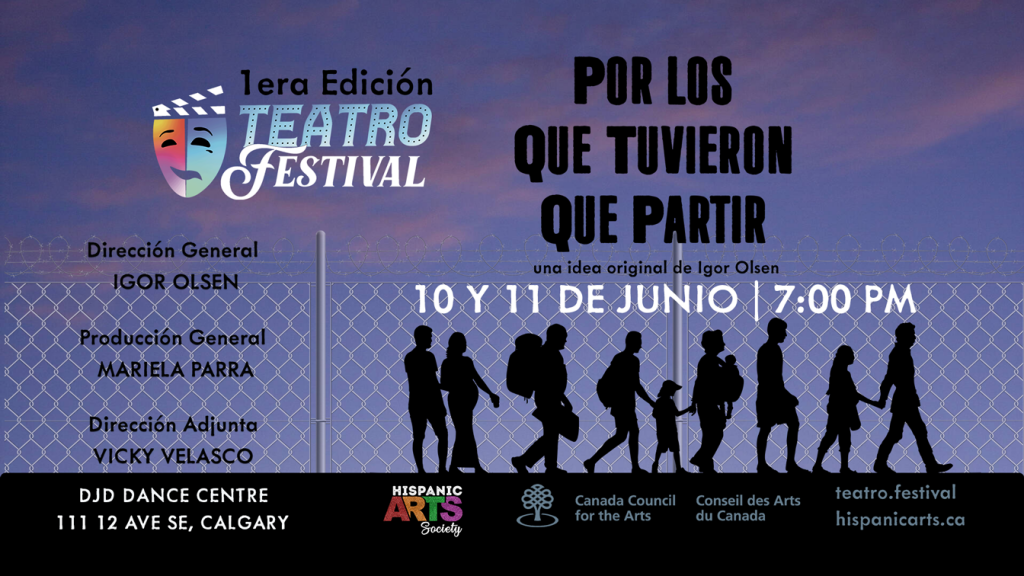 The new event of the Hispanic Arts Society.

Teatro Festival is considered the first festival of its kind in Spanish in Calgary, Canada. Performances of the works will be held annually, during the months of May and June. The festival is sponsored by Canada Council for the Arts.

The Festival will begin its journey on June 10 & 11,  2022 at the DJD Dance Centre, 111 12th Ave. SE, Calgary. We will start with the staging of “Por Los Que Tuvieron Que Partir (For Those Who Had to Leave)”, an original idea of the Peruvian-Venezuelan director, Igor Olsen.

This 90-minute adaptation of the Peruvian production “Por Los Que Tuvieron Que Partir” is based on immigrants and their stories. The Hispanic Arts Society’s cast has 11 local performers and are led by the directing team Igor Olsen, general director; and Vicky Velasco, Adjunct Director.  Teatro Festival is produced under the umbrella of the Hispanic Arts Society run by Mariela Parra, General Producer.

“After 35 years of supporting local Hispanic artists in different art disciplines, the Hispanic Arts Society is excited to continue its journey in creating a theatre culture in Spanish in Calgary. We have presented several international plays in Spanish and have also collaborated with the independent productions of local Hispanic theatre companies”, says Mariela Parra, President of the Society.

These five stories will make the Hispanic community in Calgary feel represented. Their struggles and joys of being an immigrant will be reflected in these stories.

The cast is composed by: